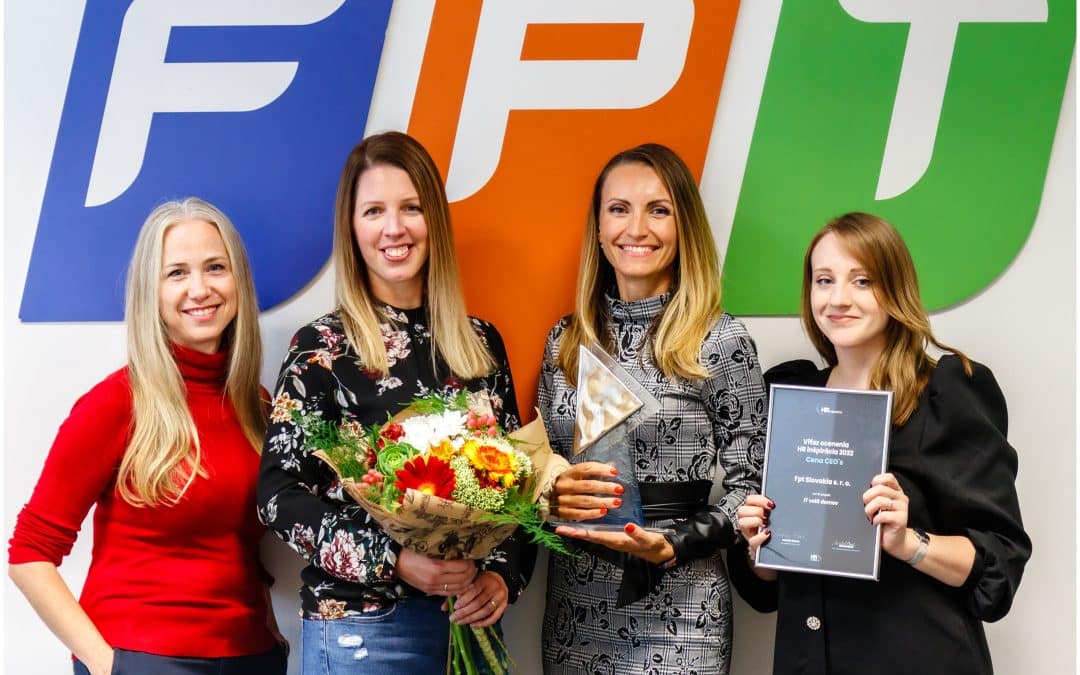 KOŠICE 3. 10. 2022 – The jury in the competition HR Inšpirácia 2022, comprised of the CEOs from the companies with innovative approach, evaluated the Fpt Slovakia's project – „IT Volá domov“ to be the most inspiring and therefore was the company awarded first place amongst 22 other strong competitors of HR projects. The originality of the project lies in the innovative idea, thanks to which the company Fpt Slovakia recruited 300 brand ambassadors in its employees, which brought the wished-for results.

The Fpt Slovakia company needed to grow significantly and to provide required services to the customers. Despite the small number of recruiters and low budget, the company proved, that changing the thinking and point of view is enough for the success to come. The campaign IT Calls home has changed the previous understanding and strategy of recruiting new employees and experts from IT sector.

“With the help of middle and upper management, as well as all with the help of all the employee we created a concept, which cleverly helped us to hire 2-times more qualified employees. Our colleagues got together and worked with enthusiasm to spread positive image about our company,“ explains HR manager Lucia Tomková.

One of the substantial ingredients, which created the right HR cocktail, was the strengthening of the campaign with the new concept #polopate. It's an activity with the goal to understandably explain and present the technical parameters of open positions in a way they would be easily interpretable.

THE NUMBERS SPEAK FOR THEMSELVES

The success came quickly and thanks to the project, the company managed to multiply the interest in technological positions in the strong IT sector. Thanks to the campaign IT Calls home, they noticed the increase of relevant CVs of 250% and they gained 9-times more internal recommendations. It's also worth to mention the hard times after the COVID-19 pandemics, when the situation on the market was very difficult, as the employees were reluctant to consider the change. The FPT company managed to overcome these obstacles and to hire the required number of qualified employees by joining forces and by engaging in the organization. And as the company awaits a significant growth in SAP, development and smart solutions areas, it will appreciate the benefits of the campaign also in the upcoming period.

THE PROJECTS WERE EVALUATED BY EXPERTS

HR Inšpirácia is an award, which was created within the HRComm platform, which unites 144 organisations with the representation through HR directors and managers of HR Departments in various sectors. In 2022, 22 innovative projects were shortlisted as candidates for the award in two categories, the CEO Award and HR public award. The jury assessed not only the originality of the project, the difficulty-level of the implemented change, but also the real effect of the innovation on the functioning of the company.

“We, as the jury, perceive the area of recruitment to be the most crucial in HR, the winning project interested us because of the elegant solution, originality and the whole conceptualization of the idea in its entire complexity, the growth of engagement in the company or because of the ability to work together on solving the problems,“ revealed one of the jury Lucia Čišková, Managing Director in the Business Lease Slovakia company.

FPT Europe – a subsidiary of FPT Corporation, the global technology service provider, today announced that FPT Europe and E.ON have concluded a 3 -year-contract for SAP related services. FPT will provide Application Managed Service (AMS) for three systems of E.ON’s ERP, including an S/4-based one. These systems are currently supporting 16,000 users from 8 countries across Europe..

Milestone for FPT and E.ON

„With this initiative we will optimize our current sourcing mix in order to achieve not only cost savings but to consolidate suppliers in the area of application maintenance and support. We see this as an enabler for service and process harmonization and integration of E.ON and innogy IT processes. Furthermore, the new setup will strengthen the BizDevOps model within E.ON by closely integrating external resources into cross-functional teams,“ explained Mr. Wendiggensen, Vendor and IT Transformation Manager at E.ON Digital Technology GmbH, the main objectives of the contract.

The contract marks an important milestone of the cooperation for both sides. Since 2020, FPT has helped E.ON to increase cost efficiency of their SAP CORE domain with the ongoing S/4 projects.

„We are pleased to serve our client in one of their business-critical domains. It shows that our long-term strategic partnership is really a win-win collaboration in mutual benefit for both sites. We will continue to develop our strong presence in SAP domain as this belongs to our long-term digital transformation strategy.“ said Emil Figura, FPT Executive Account Manager for E.ON.

FPT solutions help other companies to maximize their business

FPT has more than 20 years of experience delivering services related to SAP. With a pool of more than 300 functional consultants and 250 technical consultants, the company has successfully implemented and rolled out SAP systems for its customers in Southeast Asia, Japan and Europe.

Fpt Slovakia has a commitment

This is a great responsibility for Fpt Slovakia, as it will deliver application support and extend the standard SAP ECC and SAP S / 4 HANA modules, as well as SAP BW, SAP HANA BW and Ariba.

“I am honored that EON has chosen FPT as a reliable strategic partner. I am very pleased that one of the crucial factors in decision making is the high quality of my colleagues' work of our SAP teams in Prague and Košice", said Tran Coi, CEO of FPT Slovakia. "This contract, with a value of several million euros, represents another step for our nearshore centers to transform the company from a supplier of resources to a supplier of end services and solutions with more added value, including those for SAP S/4HANA.“ 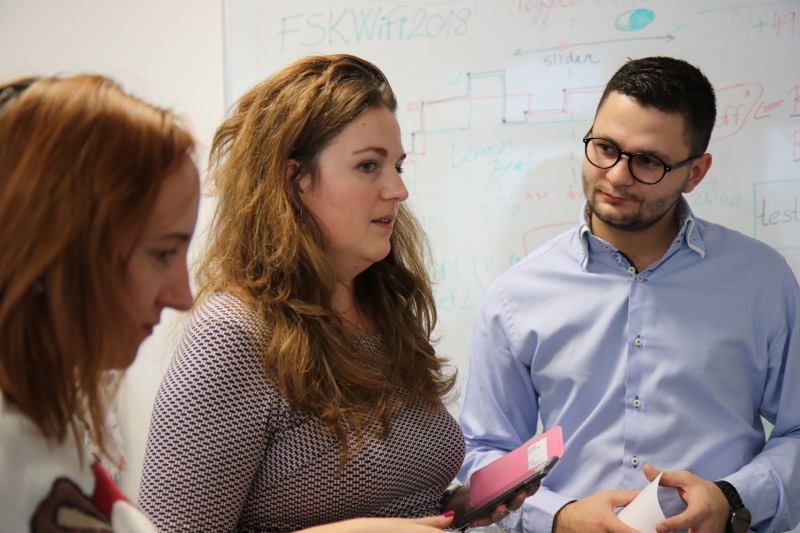 We have our own IoT solution to measure temperature.

We have developed our own, affordable solution for automated human temperature measurement. Thanks to special sensors and an advanced measurement algorithm, which takes into account the distance of a person and the temperature in the room, it is possible to reconstruct the obtained data into the so-called heatmap and create an image well known from "thermal cameras".

The big advantage is that the device does not use a real camera that would capture the face. Thanks to that, it is secured personal data protection at high level. You will find this device at the entrance to the Fpt Slovakia building. The IoT solution was developed within two weeks by one of our colleagues, an IoT specialist – Tomáš Lörinc.

Tomáš had the idea to create an automated temperature measuring device in his head right at the beginning of the pandemic. However, he decided to implement it only after the April company meeting, at the initiative of colleagues. This is not Tomáš's first IoT project, he has been working in this area for a long time. He worked on this particular one for about 2 weeks. A second prototype is currently being deployed, which was the logical outcome of the internal PoC project.

"Since my area of interest is mainly IoT, connectivity and HW, I would welcome advice from colleagues who are experts in another field. Rado Bálint helped me choose a suitable solution for data visualization."

Of course, there are also ready-made solutions in the form of thermal cameras. However, these are very expensive and their primary purpose is not to measure a person's temperature at the reception. Our solution is more than 10 times cheaper and at the same time tailor-made directly for our needs. The device is connected to the Internet and is able to communicate using the MQTT (SSL) protocol, making it one of the most versatile devices for automated temperature measurement. Last but not least, we care about the protection of personal data, which we thus control 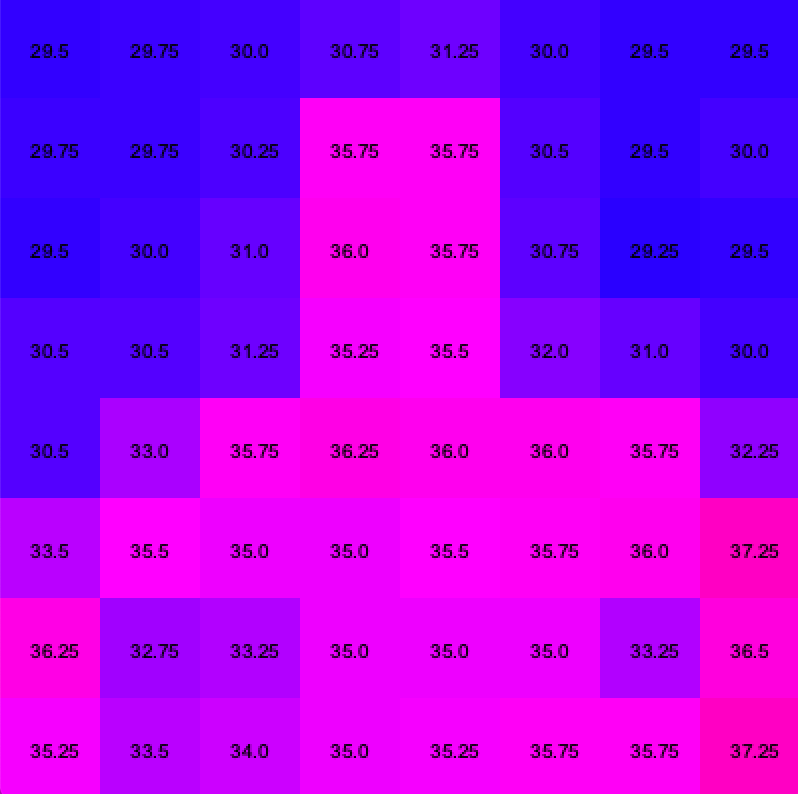 „Of course, our device can be expanded at the customer's request with a camera with high resolution and face recognition, or a card reader and thus ensure that the temperature is assigned to a specific person,“ Tomáš adds.

We are constantly working to improve the device as well as its detection algorithm. Thanks to OTA updates, we are able to update FW devices even remotely. Tomáš sees other possibilities of use in the area of monitoring desk occupancy, which is currently a very popular segment. Thanks to a sufficient viewing angle, one sensor would be able to replace several motion sensors currently used for this purpose. Another possible area of use is the monitoring of premises with the remaining demand for personal data protection. For example, some airlines have a problem with the on-board toilet being used by more than one person at a time, the so-called Mile High Club. Such a sensor can unambiguously determine the number of people without invading privacy and notify on-board personnel.

„Our company has been working on innovative projects for a long time and supports creative people,“ said Mr. Jozef Vojtko, Vice Director of Fpt Slovakia. And stated further that the crisis gave way to new technologies, innovative ideas, and at the same time accelerated their implementation in practice.

„It doesn't always have to be big international things. Our colleagues proved it on several examples, either by automating internal processes or by automated temperature measurement. Tomas is an excellent example of this.“