At the end of last week, Union health insurance company implemented already the sixth year of the prize giving ceremony of the national contest “Healthy Company“, which is part of the “Healthier Slovakia” initiative.

For the first time, the competition involved also our company that transformed it immediately into great award in the category “Best Newcomer“, which we have gained as the only company in Slovakia.

Our efforts to invest into the health of our employees were awarded by a professional jury made up of representatives from the Ministry of Health of SR, WHO in Slovakia, nutritionists, OHS representatives of the company Falck SK and HR professionals. It did not only evaluate support of companies in the context of a healthy lifestyle and employee care in the area of benefits or health events, but considered also healthy working conditions.

As part of our commitment to a healthy work environment, we take pride in building facilities where we have relaxation areas, quality working places equipped with premium ergonomic chairs and adjustable tables.

Equally important are the excellent internal events and lectures that we devoted to health and promotion of balance between the personal and professional life. Besides the above mentioned activities, we support the community Active life, do sports, garage bicycles, drink filtered water, we supported Wellness coaching, secure the monthly magazine on the balance between work life and private life, take into account the working hours and have an excellent social program. It is only up to our employees, which of the number of the offered advantages they use. 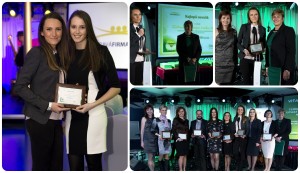 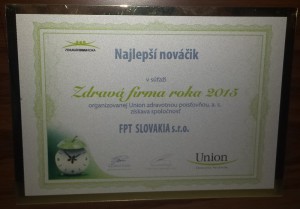 In spring 2015 we introduced new FPT Recruit/ Employer brand campaign called PLAY IT. It was event / online campaign with 2 main goals: a/ to bring newcomers to the company, b/ to increase awareness of a new FPT brand within Slovak IT community. We participated on 4 job fairs in spring – 2 in Kosice and 2 in Bratislava. During the last one – National Days of Career 2015 in Bratislava our concept and showcase “PLAY IT” using selfie-bot, won a prize for the best showcase. The whole campaign obtained very positive  feedback from audience, members of IT community or even our current employees. Thanks to the campaing we reached more than 4000 % more CVs in cumulative effect (when comparing Q4 2014 and Q1 + Q2 2015) and at the end of day, we welcomed almost 60 newcomers / FPT-ers within Fpt Slovakia in 2015.

The 9001 norm on the quality management system is based on the organisation management  whose aim is a continuous improvement of work and customer satisfaction and was awarded to Fpt Slovakia in 2014. After a detailed audit, the auditors awarded the norm also in the area of standards introduction – the ISO 27001 norm.

The goal of our company is to continuously improve the quality of processes and services which also influence customer satisfaction. In 2014 we passed the external audit which confirmed that our systems of organisation management and standards meet the criteria defined by the ISO 9001 norm and the ISO 27001 norm. Our company in 2016 also implemented the IT service management system in accordance with ISO / IEC 20000-1: 2011 requirements.

We are top among IT companies! Numbers confirm our quality

The company PwC in cooperation with the Human Resources Management and Development Association and support of the TREND magazine awarded companies which manage their human capital in the most efficient way and determine the best practice on the Slovak market in the area of human resources. The companies which joined the HR Controlling 2014 study were included in the evaluation.

We obtained Via Bona 2010 Prize

Our company was awarded the Via Bona 2010 prize for engaging its employees into voluntary activities. The prize is awarded annually by the Pontis foundation based on the decision of an independent expert committee. The committee has acknowledged the innovative attitude of the company regarding the content change of the annual teambuilding. The company had been nominated for the project “You Are the Hero“. “While preparing the project “You Are the Hero”, I perceived various opinions on the voluntary work in the Crisis centre Dorka in Košice. I am happy though that after we finished the work, not only the eyes of the clients of this facility, but also the eyes of all my colleagues shined,“ Olaf Baumann said.

The goal of the event was to help a non-profit organisation in the region of Eastern Slovakia on a voluntary basis. The Team Day 2010 with the topic “You Are the Hero” took place on the Volunteering Day (September, 10th 2010) in form of help to the Crisis centre Dorka in Košice. During the course of the day, almost 200 employees wheelbarrowed 40 ton of sand, sandpapered 60 meters of fencing and used 250 litres of paint on 1200 m2 of wooden ceilings. Thanks to their work a new playground for children, 2 atriums prepared for hanging clothes to dry, a relaxation zone, cleaned and painted attic, ironed clothes, cleaned storage room and 3 painted children rooms were created.